Azure Resource Manager (ARM) templates let you define your Azure infrastructure as code. Because it’s in code, you can run tests against this code, and I’ve spoken about using Pester, the PowerShell testing framework to test ARM templates before. By testing your templates, you can attempt to catch errors before you deploy.

Currently, there are around 21 tests that run against your templates; I’m sure this will grow over time as we build up a library of useful tests. This project is open-source, so if you have tests you think should be added, then this is an excellent opportunity to add them yourself, visit the GitHub repo.

Unfortunately, the TTK hasn’t yet made it to the PowerShell gallery as a module, so you need to install it manually from GitHub. To make it more difficult, it’s also not stored in its own repo but is part of the Azure Quick Start templates repository. Git makes it very difficult to check out a single folder, so you will probably end up checking out the whole repo to get this. The QuickStart repo is quite large, so if you are only checking this out to get hold of the TTK (rather than planning to commit back), you use the git shallow clone command to limit the download.

Once you have cloned this, you will find the TTK inside the test\arm-ttk folder.

There are 3 ways you can run the TTK:

Note that if you are planning on running these tests on Linux, you need to have PowerShell core installed.

To run the tests, we first need to import the library, which you can do either from where you checked out the files, or copying the module into your PowerShell modules folder.

Now the module is imported we can use the “Test-AzTemplate” command to run the test. There is only 1 required parameter, which is the path the template file or folder containing the template file you want to test.

To test a single file called azuredeploy.json, we can run:

This command runs all of the tests against that file and outputs the results to the console using the standard Pester format. 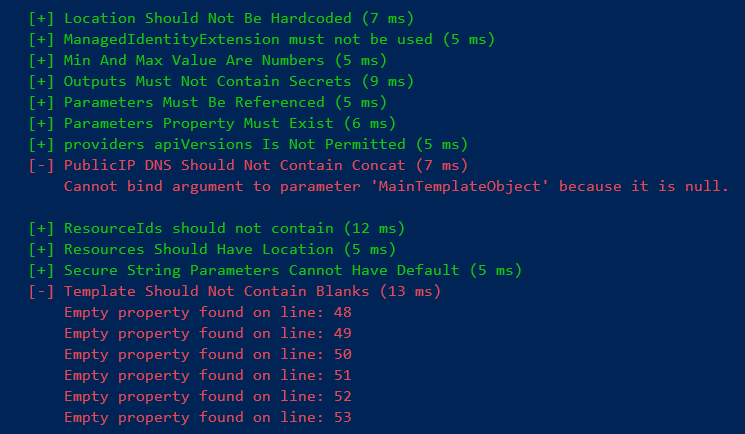 This command runs tests against all Json files in that folder. If you also have parameter files in the folder, which shouldn’t be tested, then we can amend the command to exclude those based on a naming convention. I generally name my parameter files as “tempalteName.parameters.json”, so we can exclude them like this:

Contributing to the TTK

While this is a Microsoft created project, it is open-source and available on GitHub. If you have tests you think would be useful, ideas for improvements or issues, please do consider contributing or raising an issue on GitHub to help improve this tool. Hopefully, we can make this the source for validating ARM Template best practice.