As we head towards the end of the year, I wanted to take a look back over all the Azure updates and announcements we have seen throughout this year and review some of the highlights.

Based on the data from the Azure Updates site, we have seen 842 updates and announcements throughout the last year. As you might expect we’ve seen the number of announcements increase month on month, up to the big announcement windows of Build and Ignite. 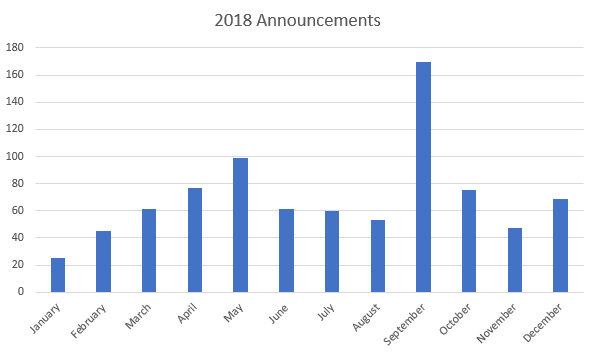 We can’t cover all 842 announcements here, so instead let’s take a look at some of the highlights (at least from my perspective) of the year, and the areas that if you’re not already aware of, you might want to look into. I am sure there are things I have missed, or not highlighted, feel free to bring them up in the comments! I’m also only covering the main Infrastructure, PaaS and Serverless announcements here, areas such as big data and IoT are not something I’ve kept up enough with this year to be able to summarise.

We’ve looked back at this year’s highlights, so let’s look forward now to 2019. I’m sure we will see lot’s of new products and improvements to existing ones, here are some things that are on my wishlist to appear in 2019 (no NDA information here, just things I would like to see) :

I’m sure 2019 will bring lot’s of exciting new services and features, and probably lot’s of frustrations and issues as well, but that is the fun of working with the ever-evolving cloud. Here’s to a fun and exciting year, happy new year!